Ronald and Chandra Gibson work with “flooded and gutted” homes that run the gamut of issues from mold to rot to health hazards.

Because of the severity of these concerns, Ronald understands and preaches the importance of never cutting corners. He’s built up such a reputation, in fact, that agents seek him out and get deals to him first and appraisers use his houses as comps as he sets the tone for each neighborhood.

Ronald and Chandra ease any misconceptions about the homes previous flooding by always presenting high-quality results. Chandra does the interior design, and although they understand that it often means more money spent, their motto is “If we wouldn’t move into it, we won’t put it on the market.” And with a motto like that, they’ve never had a house sit on the market more than one day. They often reconstruct the interior layouts to make sense and, according to Ronald, “woo people” with their design.

Ronald tries to sell each house before it goes on the market, and has had three pre-sales out of that strategy. 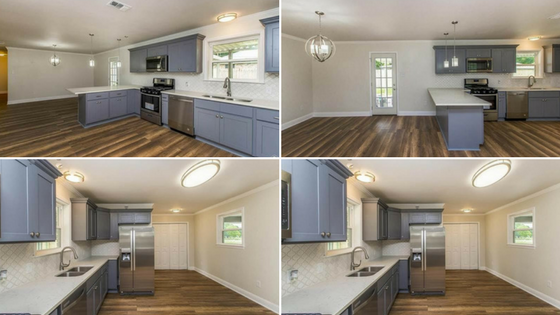 With a full-time job with shell chemicals and three kids–13, 12, and 7 years old–Ronald and his wife, Chandra have found a way to keep their schedules full of restoration projects without sacrificing work and family time to do it.

With the advice of his Success Accountability Group coach, Mike, Ronald has had people calling him for help. Recently, he was approached by a fellow investor who got near the finish line with the property only to learn that the mold wasn’t properly taken care of and overtook all the new cabinets, drywall, and finishes. Ronald tries to help by buying out projects that he can, but if the numbers don’t make sense, he can’t always help.

For more on the Lee Arnold System of Real Estate and the Success Accountability Group and coaching, call (800) 473-6051 for information and to start your journey of success today.

He has had a “beautiful experience” working with COGO. “If there have ever been bumps and bruises,” Ronald said, “the COGO staff is quick to clean them up and provide great communication.”

The loan officers walk him through everything as needed. In fact, Ronald and Chandra were recently in the process of purchasing their own home, and the mortgage company needed all sorts of documentation about their investing work.

“Cogo was more than helpful and accommodating with the information we needed.”

His advice? Take action! He often interacts with people who started with the Lee Arnold System of Real Estate at the same time as he did, yet they haven’t moved from where they began. Always trying to move them forward, Ronald wants to see them succeed alongside him and encourages them to press on.

We appreciate his encouragement to others and support Ronald and Chandra in their continued success!

Your Partner is Profit;